Developed during a time of grief,  “My Dakota” conveys a sense of isolation while also connecting the viewer to the land of South Dakota.  We follow Rebecca Norris Webb throughout her travels as she documents and studies her home.

Abigail Smithson: When you started My Dakota, what scenes, objects, or landscapes did you know that you wanted to include? Were there images or parts of South Dakota that you had in mind that you knew you wanted to document?

Rebecca Norris Webb:  The first year of the project, I had some vague notion that I wanted to return to my home town in the Black Hills, and maybe wander through “West River,” which is what South Dakotans call the half of the state west of the Missouri River where I grew up.  A year later, my brother died unexpectedly and everything changed.  For months I was lost — literally and emotionally — and often found myself driving through the badlands and prairies for hours without stopping.  Those first dark months, my grief seemed to be fueled by an overwhelming restlessness.

AS: Where is the line between your poetry and your photography — in particular with My Dakota where you have stated that you had a writer’s block after your brother passed?

RNW: Creatively, there isn’t a line. I see in images, whether I’m holding a camera or a pencil. I agree with Wright Morris, who also combined text and photographs in his books: “I don’t give up the camera eye when I write, merely the camera,” said Morris.

©Rebecca Norris Webb, “The Sky Below,” from My Dakota

As far as my creative rhythms go, I’m finding that each book is unique. With My Dakota as you’ve already mentioned, I suffered writer’s block in response to the first grief of an immediate family member. The writing only came at the end of the project, spare text pieces often arriving whole in the mornings when I’d awake in my motel room when traveling alone through the badlands and prairies.

For Memory City, the collaborative book I’m currently finishing with photographer Alex Webb, my husband and creative partner, on Rochester, NY, it was a different story. Working in this upstate New York city — the home for 125 years of Eastman Kodak, a company that declared bankruptcy last year —— during what may very well be the last days of film as we know it, my first text pieces came during the second of five trips to Rochester.

Lastly, for my most recent project, “A Field Guide to Silence,” surprisingly the writing appeared before the photographs, something that has never happened before. Perhaps that’s because I started the project on a South Dakota ranch, and I had the owner’s homestead house all to myself to read and to muse and to write and to leave from time to time in order to photograph in the nearby badlands.

AS: The way you’ve portrayed the land it seems almost to be your companion: Something that is observing you while you are documenting it. Would you talk a little about your relationship with the landscape of South Dakota, and whether or not this relationship changed over the course of the project? 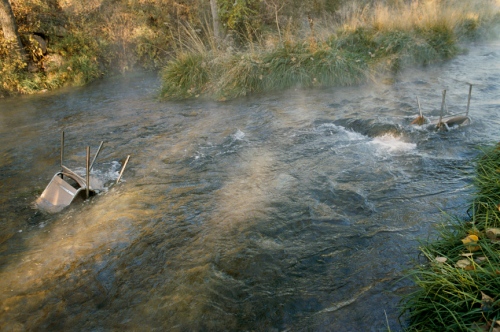 RNW: Home to me is the rich, familiar emptiness of the badlands and prairies. After my brother died, it provided me with much needed breathing room, both emotionally and creatively. I’m not sure I’d call the landscape my companion, but I would say the South Dakota landscape and its natural world of migrating pronghorn, roaming buffalo herds, and legendary bad weather spoke to me when I was most grief struck in ways one’s wisest friends do during life’s darkest times — through silence and simply being there.

AS: This work has a feeling of solitude and contemplation. Can you talk a little more about these two things and how they relate to My Dakota?

RNW: Looking back, I realize now that I needed South Dakota’s space and solitude and silence in order to work as deeply as I did on My Dakota. It’s something I haven’t been able to do consistently in Brooklyn, where people are too often huddled over their smart phones and where even my urban refuge, Prospect Park, is wired for Wi-Fi. Perhaps that’s partly why the badlands keep calling me West for this new project, “A Field Guide to Silence.” I continue to crave the stillness, the solitude, and those blue, seemingly endless Great Plains skies in order to realign my creative compass, which I suspect points “True West” instead of “North.”

To see more of Rebecca’s work (along with the work of Alex Webb) click here. You can also follow their collaborative blog “Two Looks” by clicking here.

Artist talk/walk through “My Dakota” at Ricco/Maresca Gallery, Saturday, June 22, 2013.